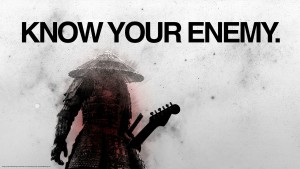 “Know your enemy and know yourself and you can fight a hundred battles without disaster.” Sun Tzu – Chinese General

So, you have decided to learn how to play the guitar? Awesome! Guitar will provide you so much joy and pleasure the more that you play it.

But, there are some potential roadblocks in your future. And it’s important for you to be aware of them, so when they rear their ugly faces, you can be prepared to defeat them. Then you can climb to the top of the hill triumphantly, raise your goblet of rock, and make a toast to conquering your defeated foes.

It’s been often said that the best defense is a good offense. So let’s take a moment to get to know your enemy. These are the five most common foes you will encounter on the road to guitar playing.

Steady yourself. Take a deep breath. Enter your fighting stance. 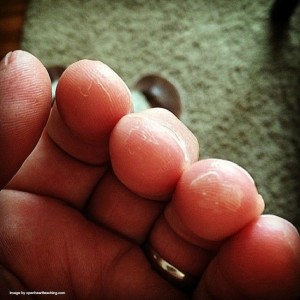 Let’s start right off with a reality: your fingers will hurt. You are placing soft flesh up against metal (or nylon) strings and applying a good amount of pressure on a regular basis. You will experience some discomfort at first.

Just think back to that new pair of shoes, climbing the monkey bars during recess, or attempting to rollerblade (does anyone roller skate anymore?).  At first, the pain is frequent. But, similar to walking around with no shoes on during the summertime, your skin will begin to adjust and become calloused and firm. 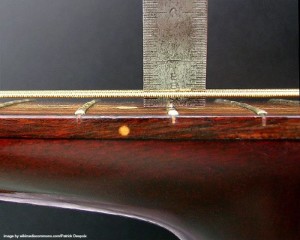 Action is not a Jean Claude Van-Damme movie or how your friend’s social life is like. Action refers to the height of the guitar strings in reference to the fretboard. The higher the action, the harder it is to play.

Many garage sale prizes or hand-me-down guitars boast an uncomfortably high action. This is a result of a guitar’s neglect, abuse, and/or its cheapness factor. When the strings are higher off of the fretboard, you will have to squeeze harder to get some sound from it.

It can usually be fixed by adjusting the truss rod in the guitar’s neck, changing the strings to a lighter gauge, and setting the bridge and saddle to a more manageable setup.

If any of those steps confuse you or scares you, a qualified guitar repairman can do these for you. Just ask them to “setup” your guitar. 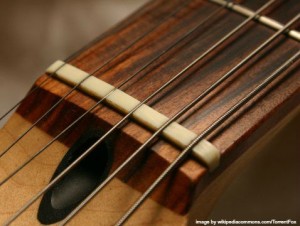 The nut is where each guitar string is seated behind the first fret. It can be made of plastic, bone, ivory, copper/metal, or a synthetic material. Each groove holds the individual strings in place. They are designed to hold each string according to their size.

Sometimes, the nut becomes worn and the grooves widen from using the wrong gauge of string. They also can chip and/or even break off in places. You know the nut needs to be looked at when you hear a “ping” noise when tuning.

The best bet is to have a repairman inspect the nut and ensure that it is in optimal working order.

Strings are what make your guitar sound great or terrible depending on their condition. They are made from different materials in accordance with what type of guitar you own. Strings that have been on a guitar for a while will sound lifeless and dull. They will have little dents in them, making them more susceptible to breaking and not holding their tune consistently.

Make sure that you have new strings put on your guitar regularly. New strings make your guitar sound better, play better, and help it stay in tune longer.

Be aware of the string gauges on your guitar as well. Typically, most guitars are strung up with a lighter gauge string which is easier on the fingers.  Heavier gauge strings make a guitar sound better and louder, but they come at a price. If the gauge is heavier, they will also be harder to play in general. 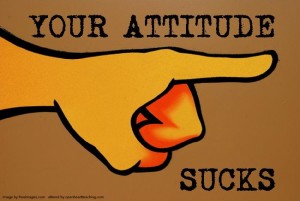 Didn’t see this one coming, did you? But, we saved the strongest enemy for last.

Your attitude will be the primary opponent in whether or not you succeed on the guitar. We are always hardest on ourselves when it comes to becoming good at something. Those voices in your head that say you’re too old to learn, or it’s going to take too long to get it figured out, or some other silly lie you tell yourself about learning the guitar.

Are you going believe that junk? Then maybe this is the enemy that will do you in.

Don’t underestimate a positive attitude and positive self-talk. There are others out there who are older, slower and may even have physical limitations, but they are still overcoming those obstacles.

Here is a quick example. There was a young man who learned the guitar and began making a living on the guitar by age 13. But at age 18 he suffered severe burns on his fourth and fifth fingers on his left hand in a fire. Doctors told him he would never play the guitar again. He didn’t listen. He went on to become one of the most famous jazz guitarists in history. His name was Django Reinhardt. 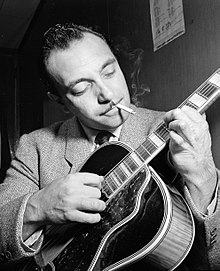 It’s important to keep in mind that you have never played the guitar before. You must give yourself permission to suck at it at first. All of these enemies can be conquered. The more you sit down with it, the easier it will become just like anything else in life.

Just remember this: the real secret to success with the guitar is to never give up! The one thing you should never do when learning the guitar is to quit.  Your strategy should be to burn your ships in the water so there is no option for retreat. Then simply take your victories, however small, one at a time. And be sure to celebrate them!

As your enemies lay defeated, you can gloat over them in total victory!

What are some of your setbacks to learning the guitar?